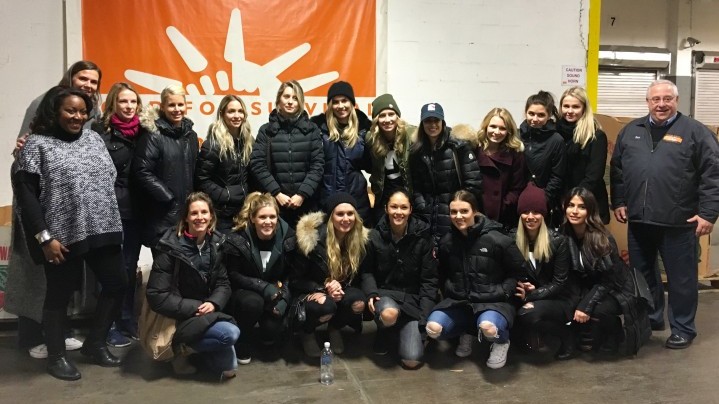 Through its network of more than 1,000 charities and schools, Food Bank For New York City provides food for more than 64 million meals annually to New Yorkers in need. NY Rangers and NY Islander wives and girlfriends are providing vital help by sorting donated and bulk items into boxes for distribution to Food Bank’s network citywide. Whichever team sorts and boxes the most food will take away the title of HLF 2016 Repack Day Champs!  The HLF is taking this opportunity to introduce the New York Islanders Children’s Foundation and to engage the newest NYC-based hockey team to get involved in the community leading up to the next NYR v. NYI matchup on the ice.

WHY: The November 1, 2013 SNAP cuts caused a loss of 76 million meals in NYC. The negative impact was immediate and widespread.  76% of food pantries and soup kitchen in NYC saw more people on their lines the month the cut took effect than they did in the immediately preceding months. Nearly half (48%) ran out of food that month and they’ve continued to struggle with elevated need ever since.  According to a new report released by Food Bank on November 23, 2015, now two years later, 90 percent of food pantries and soup kitchens report an increase in the number of visitors in September 2015, compared to September 2103 and the number of lost meals has hit a staggering 116 million due to SNAP cuts.  On a monthly basis, these cuts are resulting in the loss of more meals for New York City residents – nearly 5.3 million – than even most of the country’s largest food banks distribute. To access the full report:  Hunger Cliff NYC:  Bridging The City’s Monthly 5.3 Million Meal Loss, go to www.foodbanknyc.org

To view the photo gallery from the event, please click HERE.

About Food Bank For New York City: Food Bank For New York City has been the city’s major hunger-relief organization working to end hunger throughout the five boroughs for more than 30 years. Nearly one in five New Yorkers relies on Food Bank for food and other resources. Food Bank takes a strategic, multifaceted approach that provides meals and builds capacity in the neediest communities, while raising awareness and engagement among all New Yorkers. Through its network of more than 1,000 charities and schools citywide, Food Bank provides food for more than 64 million free meals for New Yorkers in need. Food Bank For New York City’s income support services, including food stamps (also known as SNAP) and free tax assistance for the working poor, put more than $150 million each year into the pockets of New Yorkers, helping them to afford food and achieve greater dignity and independence. In addition, Food Bank’s nutrition education programs and services empower more than 45,000 children, teens and adults to sustain a healthy diet on a low budget. To learn more about how you can help, please visit foodbanknyc.org.  Follow us on Facebook (FoodBank4NYC), Twitter  (@FoodBank4NYC) and Instagram (FoodBank4NYC).