This article was written by HLFYA Alumni and S.A.V.E. Scholarship winner Casey Theriault. Casey, along with fellow YA alumni Jillian Wexler and Tyler Bhalla, were invited to join Henrik Lundqvist at Madison Square Garden as the prize for being top ticket sellers/fundraisers at Henrik’s Retirement Night Celebration in January 2022. The 4th winner, 2022 HLFYA Matthew Zocks was also recognized by HLF for this achievement (though he was unable to attend on April 29th). 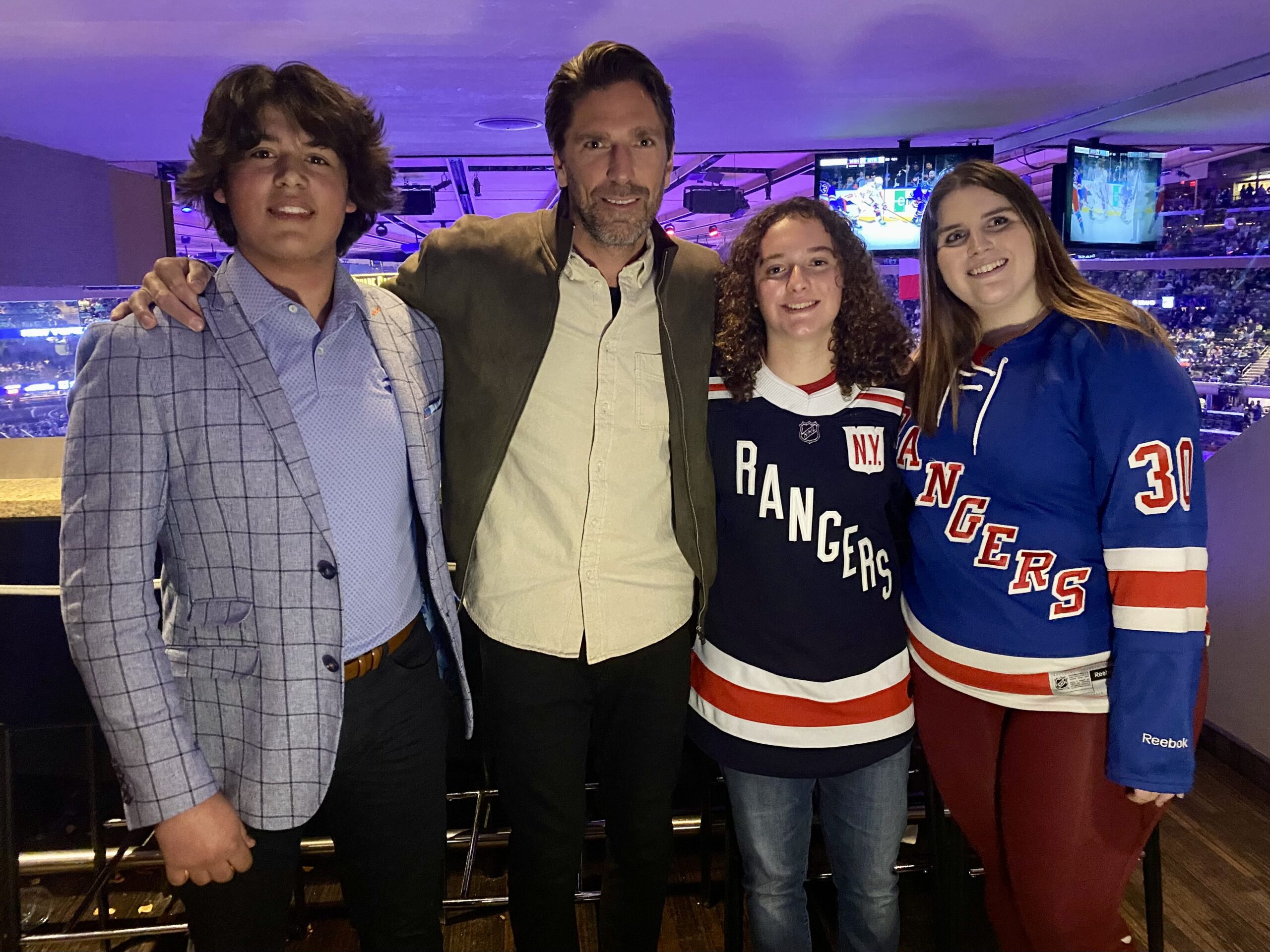 One of the greatest honors of my life has been being a part of the HLFYA program as a YA in the inaugural 2015-16 class, a mentor to the 2019 HLFYA class, and the proud recipient of the first S.A.V.E. Scholarship in the summer of 2020. Being a part of this incredible organization surrounded by young, service inspired minds like myself alone is a privilege, and on April 29th, 2022, I finally got to thank the man that made it all possible.

Going to Madison Square Garden for a Rangers game is always bound to be a fun-filled time, though when you’re treated like a VIP that experience changes entirely. Arriving at The Garden only to be greeted by security and being brought up to meet Steve Valiquette and John Giannone is certainly not your typical gameday experience. Between conversations about life as a goalie, questions about preparing for the broadcast, and talk of the upcoming playoffs, that alone was surreal. Then, moving on to being introduced to the voices of the Rangers, Sam Rosen (yes, he really does sound like that in person) and Joe Micheletti. Seeing where the magic is made to make games truly come to life on the air. They have the best view in the house! By then, it’s time for warmups so we head to our seats, which was a suite provided to us from the HLF and MSG. All the food you could want, drinks, a private bathroom, and amazing views of the ice all while still feeling like you’re at the game.

As the game goes on and conversations are flowing, Henrik Lundqvist makes an appearance to watch the game and hang out with us. It was at this point that everything came full circle for me. After letting some nerves die down, I pulled Henrik aside and talked to him about the impact he has had on me. To put it bluntly, if it weren’t for him and his extreme generosity with the S.A.V.E. scholarship, I would not be able to pursue my doctorate in combined school and clinical psychology which has been my dream since I was a little girl. I have always wanted to help provide assessment and treatment services to minorities with autism spectrum disorder and to finally be in striking distance of that dream was beyond exciting. Though, I have struggled financially for a myriad of reasons, and, with the expenses of graduate school and lack of financial aid, I did not think I was going to be able to start my doctorate despite enduring the rigorous application process and receiving an offer from my dream program. That reality had begun to set in during the summer of 2020 until one late night in August where I got an email with a video from Henrik himself attached informing me, I was going to be the recipient of the S.A.V.E. scholarship. The relief I felt was immense and immeasurable. Now, I still struggle financially, but I know the one thing I will never, ever worry about is paying for my education, thanks to Henrik. I am proud to say I am in the second year of my doctorate and I am living out my dream of serving the underserved.

Thus, meeting him face-to-face and being able to tell him that was an incredibly emotional conversation for us both. It’s not every day you get to tell the person that has changed your life immensely that they have done so, and that person also happens to be someone that you grew up idolizing. Henrik and HLF have impacted my life in ways indescribable. From the individuals working with the foundation, specifically Meredith Wolff and Johanna Bialous, to the other YA’s and alumni, Tyler Bhalla and Jillian Wexler with whom I also got to attend this incredible night with, and Henrik himself, the pride and gratitude I feel toward meeting these individuals and being presented with the opportunity to be a part of something larger than myself has been an experience of a lifetime. Yes, Henrik Lundqvist is a phenomenal athlete, but he is bigger than hockey. Henrik and the HLF are changing lives, mine included and I could not be more grateful. Thank you for everything.