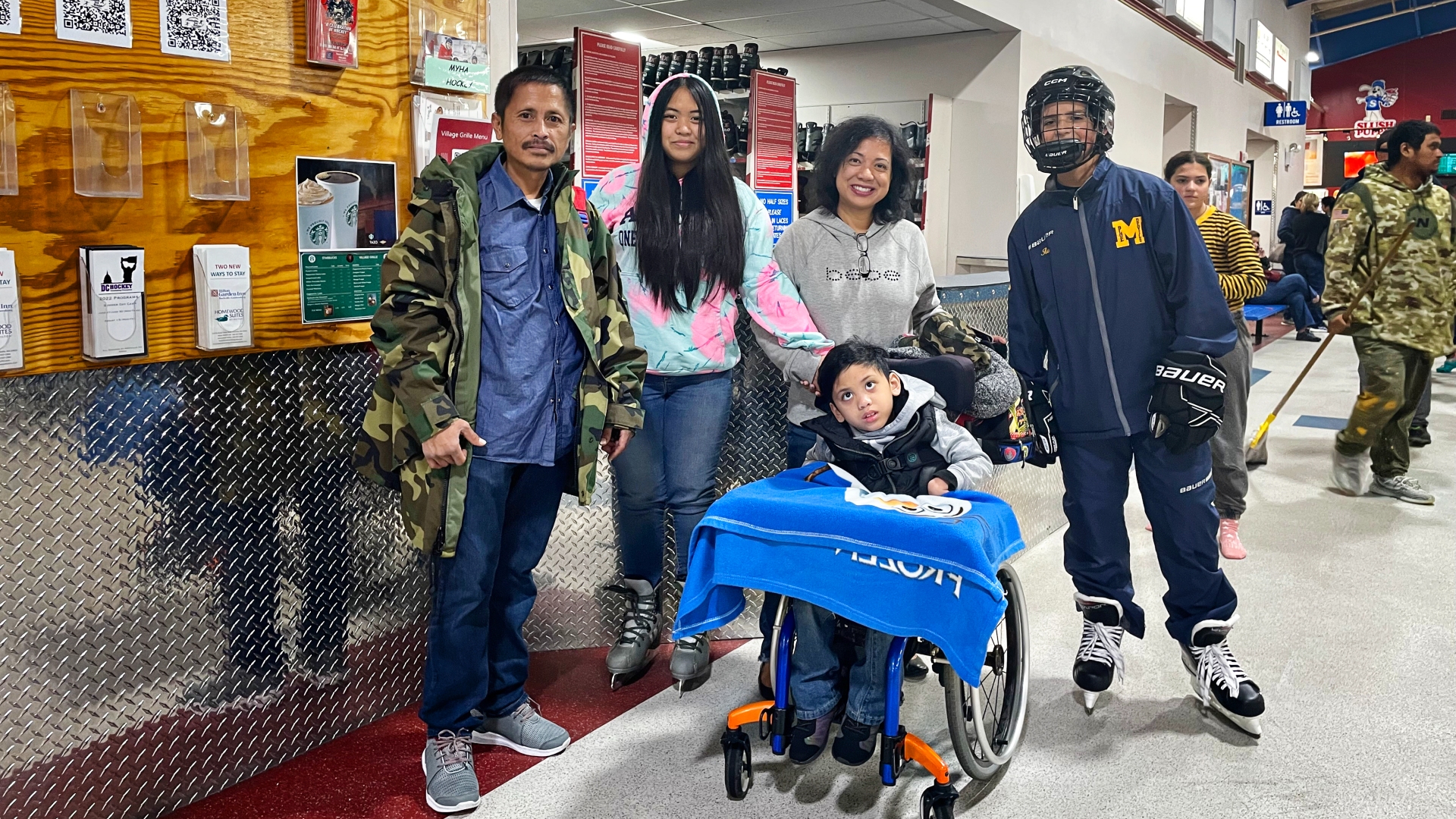 This article was pulled from NBCSports.com

A young Capitals fan is looking to make a difference in the life of a local eight-year-old boy with special needs, and he’s asking his community for help.

Ilan Shterenberg is an eighth grader at Hallie Wells Middle School in Clarksburg, Md., and the lone DMV-based young ambassador for the Henrik Lundqvist Foundation. Ilan started a fundraiser to raise money for Waldorf, Md. native Lamar Collado, who was born with a severe form of epilepsy and multiple muscle disorders, so that he could buy a customized adaptive bike that will both improve Collado’s mobility and allow him to participate in more social activities.

“Lamar was one of the people at the HSC hospital in D.C. and so they recommended him because he could really benefit from the bike in terms of physical therapy,” Ilan said in an interview at the Capitals’ practice facility. “He has low muscle tone so it could get his muscle tone up and just get his muscles active and also because it could stimulate his brain and improve his cognitive abilities.”

The Collado family has been forced to overcome many challenges in order to provide Lamar with the support he needs in his day-to-day life. His medication alone costs over $40,000 a month, but his condition requires at least one of his parents to be at home full-time to take care of him. His father, Larry, retired from his job in retail management to be a stay-at-home dad so that they could remain on his mother Marissa’s better health insurance plan.

Yet their insurance still doesn’t cover adaptive equipment. They spent seven years saving up for Lamar’s current wheelchair, but it isn’t fully customized to his needs and he’ll soon outgrow it like he has his past bikes. His older sister, Larissa, whose mother touts as being a “future engineer,” once even tried to modify one of her old bikes to save money.

A medical-grade adaptive bike would be a permanent solution as it would be adjustable so that Lamar could continue to use it even as he gets older.

“My situation, I learned how to laugh it off now because I pray a lot,” Marissa Collado said in a phone interview. “But it’s been a hard road. It’s been a hard road, but for whatever reason God just gives us the right people to be in there and Ilan is just one of those God sent.”

Ilan first learned about Lamar through Freedom Concepts, an adaptive equipment company based in Winnipeg, Canada, after he was recommended by the local hospital as a patient in need. The 13-year-old, who mans the pipes as a goaltender for the 14U Upper A Gold Montgomery Ice Devils, pitched the idea of helping someone with special needs secure an adaptive bike to Lundqvist’s foundation for his independent service project that all young ambassadors complete as part of the program.

“My uncle works in mobility and he used to work with Freedom Concepts,” Ilan said. “He told us all of the stories about how the bikes really benefited the kids, which really inspired me because it’s a kid that was likely born with a disability and they probably will never be able to ever ride a bike…One of my favorite childhood memories from when I was little is learning to ride a bike so that really impacted me.”

Lundqvist started his foundation during his decorated NHL career while playing for the New York Rangers. The former Vezina Trophy-winning goaltender signed with the Capitals ahead of the 2020-21 season but never suited up for Washington after undergoing open-heart surgery. Lundqvist did, however, briefly expand his foundation’s reach to D.C.

Ilan was too young to apply that year but did so when he turned 12, though by that point the program had been scaled back to just New York. He was granted special consideration and ultimately selected as a youth ambassador. In November, he will travel to New York City and make a presentation to Lundqvist, his wife and the foundation’s board on his project.

Two weeks ago, the Shterenbergs and Collados met in person for the first time. Lamar’s family wasn’t too familiar with hockey, so Ilan took Larissa out on the ice and taught her how to skate. After how much Larissa had worked with her brother on his motor skills over the years, this time it was her learning how to stay upright while Ilan showed her the basics.

“I know he’s still a kid but he is so mature,” Marissa said of Ilan. “His character is so amazing. I’m like hats off [and] so overwhelmed with how he carries himself.”

So far, Ilan has raised over $4,000 toward his goal of $6,500 for Lamar’s adaptive bike, which will be embroidered with the Capitals’ team logo. The team also donated signed memorabilia and game tickets for a raffle that Ilan plans to hold with proceeds going to the fundraiser.

Both Ilan and his parents, Katya and Arthur, hope that they can surpass that mark and keep going to perhaps provide more adaptive bikes for other members of the local special needs community.

“There are so many of Lamars out there and I said to [Ilan], ‘I don’t know what our [bike] costs, but this is something that I advocate — not so much the bike but the special community,’” Marissa said. “But this one right here brings joy to them. Joy. Joy that you and I take for granted, but for the special community that’s the world for them.”

To support Ilan’s fundraiser to help Lamar get the adaptive bike he needs, you can find out more here.