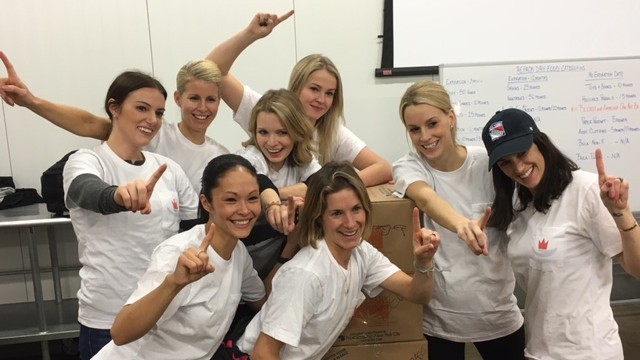 No two NHL teams play as close to each other as the Rangers and Islanders, with Madison Square Garden and Barclays Center being just five miles apart. The in-state rivalry began before the Islanders even stepped on the ice, as the team was forced to pay a territorial fee to the Rangers upon entering the NHL. At the Garden, fans have a long-standing tradition of yelling “Potvin Sucks!” during every game, citing what they perceived to be a dirty hit by Denis Potvin hit on Ulf Nilsson in 1979.

But wives and girlfriends of the Rangers and Islanders came together for a good cause Monday in the Bronx in advance of the teams’ latest clash on the ice Thursday in Brooklyn. Thanks to the efforts of Therese Lundqvist, wife of Rangers goaltender Henrik, the two groups traveled to Food Bank For New York City’s Warehouse & Distribution Center, where they repacked meals.